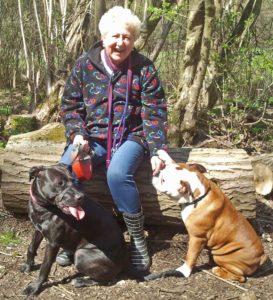 We got a text late one night this week to say one of our Packleaders’ dog walking clients in Stevenage wasn’t very well. Poor Stanley, a usually irrepressible, British Bulldog puppy is suffering from sickness and diarrhoea. His caring, doting owners doubted he would be well enough to be walked but wanted us to pop in to check up on him, let him out in the garden and generally fuss and cuddle him, something that is always a pleasure.  Stanley has been perking up a little, though is not yet his usual exuberant and boisterous self. It set me to thinking how often dogs we’ve owned have had stomach upsets and also how quickly they seemed to get over them.  I wish us humans were so resilient!  Mostly, I reckon their tummy upsets were due to them eating something noxious when out. Firmly adhering to the usual veterinary advice of starvation for 24 hours and then chicken and rice for a day or two virtually always did the trick though hasn’t yet worked for Stan the Man. The tough bit was ignoring those pleading eyes begging for food in the evening, after missing their breakfast but each time I relented and fed the dog something before the bug was fully out of their system, I lived to regret it. Cleaning up dog diarrhea is never nice!

I’m not for a moment suggesting Stanley’s owners let him eat something horrible when out walking  but all dog owners know how impossible it is to stop them sometimes. Dogs we’ve owned have eaten rabbit droppings, horse manure, anything long-time dead, cat poo, even worse… their own poo, all this despite having hugely expensive Hills Science Diet waiting for them at home. It’s a wonder dogs are not ill every week and it is a compliment to their amazing constitutions that they do so well despite their unsavoury eating habits. 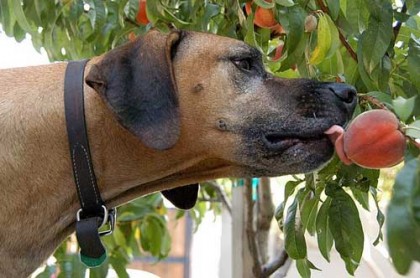 It’s interesting that although most dogs have the constitution of an ox, a cottage industry has sprung up around giving fear-mongering advice on ‘things you shouldn’t feed your dog’. I wonder if we aren’t taking our canine companions on the same journey humans have been on in recent years where a new danger food is identified each week but four years later the idea is debunked and it turns out to be good for us after all?  So, I thought it worth looking at all the sensational media coverage of foods humans shouldn’t feed dogs to see if things are truly as dangerous as is being made out.

‘Peaches and Plums Poison Pooches’ screamed a recent headline but closer inspection revealed the threat was from cyanide in the stone of these fruit. What right-thinking dog owner would feed their dog plums or peaches in any case? I’d be thinking about the messy digestive implications and my subsequent task trying to get 10 fluid ounces of sloppy dog poo into a small plastic bag without getting it all over my hands. But, if I did, I sure wouldn’t give them the fruit whole as most dogs are daft enough to gulp them down without chewing and choke themselves to death well before the poison had the chance to do its dirty work.

Dairy products are now frowned upon as most dogs are lactose intolerant. What about all those thousands of dogs being fed ice cream in parks and beaches during the UK’s recent hot spell.  Maybe they got away with it because today’s ice cream vans sell ice cream that has no dairy in it. Wiggy certainly enjoyed his with no ill effects!

I saw a serious article recently telling dog owners not to feed their dog bread dough. Apparently, it expands in the stomach. Well, who would have thought that? Bread dough expands!  Well I never… I’m thinking the kind of people who bake their own bread probably know that bread dough expands, or at least, they want it to expand. So, those who make bread know the danger and wouldn’t do it and those who don’t make their own bread don’t need to know.

Be advised that feeding between 600 and 800 grams of onions to a large dog can kill it.  That’s a full pound of onions in old money!  Have these people never smelled a dog fart???  Dog owners are subjected to dog farts all the time, usually when your beloved pooch is either sat next you on the sofa or under your chair at the dining table.  Here’s a good idea, feed your dog a pound of onions, that’ll help!  Hmmm.  I can’t see many dog owners wishing to feed onions to their dog.

Another article warned dog owners not to feed their dog corn on the cob, apparently it can cause intestinal obstruction.  I notice they didn’t say don’t feed your dog sweet corn, they said, don’t feed it corn on the cob.  I’m guessing the unfortunate mutts in these cases were mostly Labradors who are famous for hoovering their food down without chewing.  It doesn’t take a genius to work out that a dog eating a corn on the cob without chewing it, is highly likely to suffer an intestinal blockage.  In the unlikely event it does get through, it probably won’t fit too well in the unduly, optimistically small, poo bags that I buy.

As professional dog walkers covering Stevenage, Knebworth and Walkern, we know dog owners whose dogs have a huge variety of human foods without any noticeable impact and others where the slightest change in diet causes illness, so please don’t think I am saying all the above foods are safe.  In many cases they are very much unsafe but we do need to keep a sense of perspective.  It is nevertheless true that comparatively small amounts of onion or garlic fed to a dog daily can be a genuine health risk.  Some dogs owners feeding their dogs fatty scraps may be contributing to their dog developing pancreatitis.  Chocolate, especially dark chocolate is dangerous to dogs, though white chocolate is far less dangerous, mainly because, as we all suspected, white chocolate has little chocolate in it.  Avocados can be lethal but I gather it is predominantly the Guatamalan avocados that pose a threat.  Grapes and raisins are an unexpected danger to dogs, as are macadamia nuts, whilst all nuts can be dangerous to puppies.  Nutmeg and mushrooms can act as hallucinogens with dogs.  Nobody wants to be in the same room as a German Shepherd or Rhodesian Ridgeback that’s tripping on magic mushrooms.  So perhaps, despite my cynicism about the media inflating the risks, dog owners are, after all, better off feeding their dogs just dog food, not human food. You know it makes sense!