Getting involved in the rescue of Romanian street dogs was the last thing I expected to be doing yesterday.  We were blissfully unaware that wonderful UK animal charities bring these sad cases back to the UK each week in specially constructed transit vans.  Some of the dogs go to owners offering them a ‘forever’ home but most go to dog rescue centres who then try to rehome the dogs.

Due to a car breakdown, Walker’s Creek Rescue charity had no vehicle to collect a dog called Jeannie from the transit van when it arrived at South Mimms Service Station.  As part of our dog walking service in Stevenage and Knebworth and our house & pet sitting in Hertfordshire, we do have insurance for acting as a pet taxi and were asked to help out.  Clearly, saying ‘no’ was not an option and Lynn wasn’t going to miss out on a dog rescue, so we packed up our dog transport crate and water, plus a little ham for treats and headed for South Mimms.  On arrival, we found three cars already waiting, all rescue charities picking up between three and five dogs each.  Over the next few minutes more cars arrived containing various excited families with children in tow to collect their new family pet when it arrived.  One lady was literally beside herself with excitement having befriended a street dog while on holiday in Romania and fallen in love with it.  Organising its rescue had taken months and she was literally bouncing up and down as the transit van pulled into the coach park.  Her excited squeaking and dash to her dog’s cage when the Romanian driver opened the van door did bring a tear to the eye but wasn’t especially helpful to maintaining a calm state of mind in the other dogs still crated in the van. 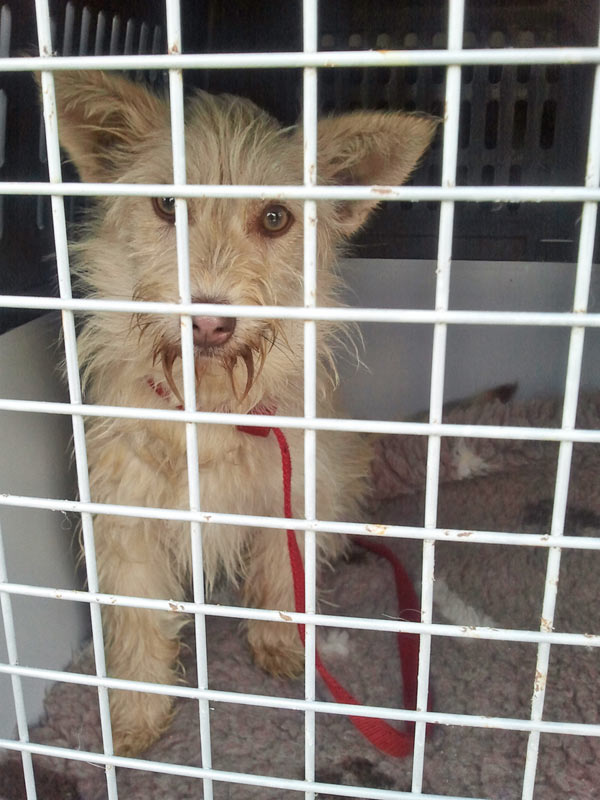 Eventually, our turn came and we were called forward to collect the heartbreakingly lovely Jeannie and her pet passport.  Jeannie is a beautiful, gentle, cross breed with the most loving nature.  The driver offered to carry her to the transport crate but her little wagging tail and gentle demeanour showed there was no need for that and Lynn was relishing the opportunity to carry her.  Their resilience and trust, bearing in mind their awful experiences is truly staggering.  Jeannie was a little too nervous to have a wee but went into her crate without a protest.  Lynn, on the other hand, was far too excited to not have a wee, so Jeannie and I settled into a bit of wait while she trotted off to use the services, disdainfully ignoring the nearby bushes I’d helpfully pointed out.  I gave Jeannie a much needed bowl with some water while we waited and when Lynn got back, she gave her some small pieces of ham which she ate, though hoovered might be a better description. 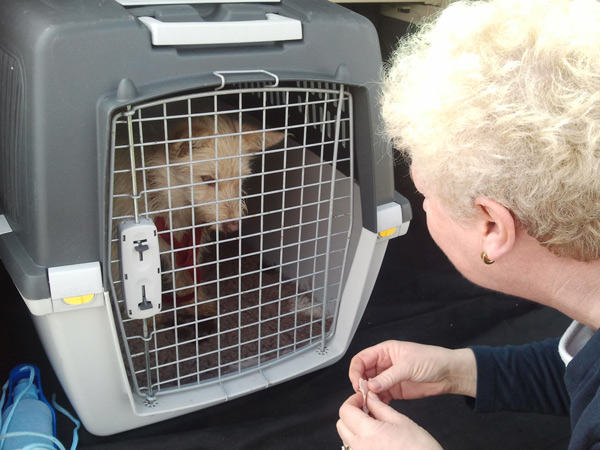 Once Jeannie was settled, we headed off to Chatteris in North Cambridgeshire, an hour and a half drive, to drop her off with a wonderful lady called Claire who runs a horse rescue charity for terminal and ill horses and does dog rescues as well.  Claire was bubbly, caring, enthusiastic and clearly, as busy as heck but she did stop long enough to have a poorly taken photo using my 1G phone.  When you look at the sweet, gentle nature of dogs like Jeannie who need saving, it does make you wonder why people spend over £500 buying a pedigree as a household pet.  Having owned various rescue dogs and pedigrees, we always had less problems with the rescue dogs!  Fingers crossed that someone comes along soon to give this gorgeous little dog a ‘forever’ home. 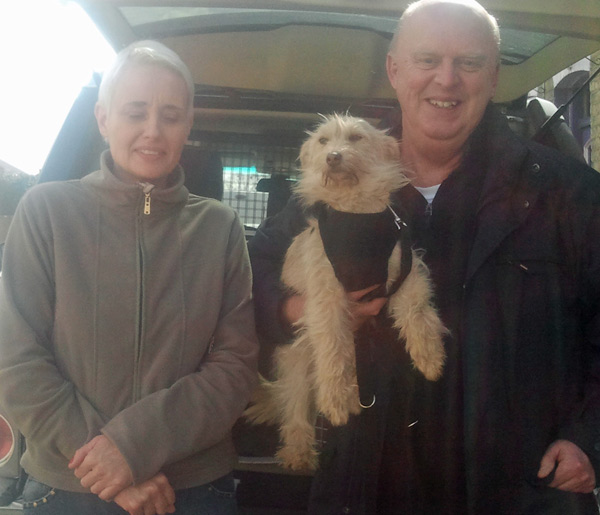 All in all, it certainly made for a very different Saturday compared to our usual dog walking duties in Stevenage and Knebworth.  Meeting and talking to the people involved in animal rescue, you wonder how some human beings can be so cruel to animals but to counter that, the work, sacrifice and dedication of the animal rescue volunteers is humbling and does reinforce your faith in humanity.